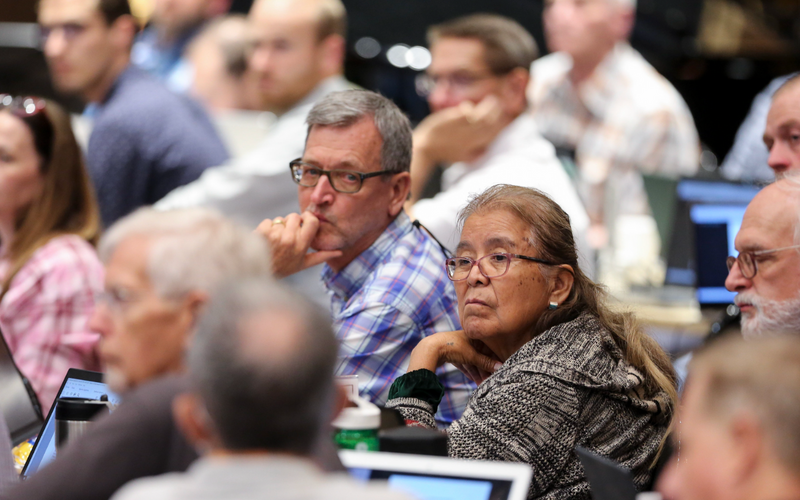 Having just returned from the 2022 meeting of Synod of the Christian Reformed Church in North America, I’d like to share my perspective on what was considered and decided. I’ll do this in three short installments over the next week.

First, please be aware that Elmhurst CRC is part of a bi-national denomination (USA and Canada) that includes more than 1,000 churches. At this year’s Synod, 25 congregations from Venezuela joined our denomination making it more international than ever before! The denomination is divided into 49 “Classes” (plural) that are composed of 20-25 congregations. When an annual Synod meets, each “Classis” (singular) sends four delegates (an elder, deacon, pastor, and at-large member) as representatives at the denominational meeting.

On the Human Sexuality advisory committee, we had 24 people with more than 600 pages of material to process on behalf of the Synod. The main document was the “Human Sexuality Report” or “HSR,” which was the work of pastors, professors, and scientists written and researched over a five-year period in response to a mandate from Synod 2016 to “articulate a foundation-laying biblical theology of human sexuality that pays particular attention to biblical conceptions of gender and sexuality.”

The main recommendation to the Synod in response to the HSR was a modest sounding one,

“That synod recommend the HSR to the churches as providing a useful summary of biblical teaching regarding human sexuality.” Notice that the HSR is not described as THE definitive summary, nor the final word, nor the end-of-the-matter regarding perspectives on human sexuality. I do believe that the HSR can be a helpful and a powerful tool in starting, facilitating, and guiding these significant and tender conversations. We need help doing so!

Our advisory committee frequently spoke of the following vision of discipleship with two distinct, well-defined poles:

Next Installment: The 7th Commandment (Do not commit adultery) and the meaning of “Unchastity” in our Reformed Confessions. Yep, we talked about that at Synod for a long time.