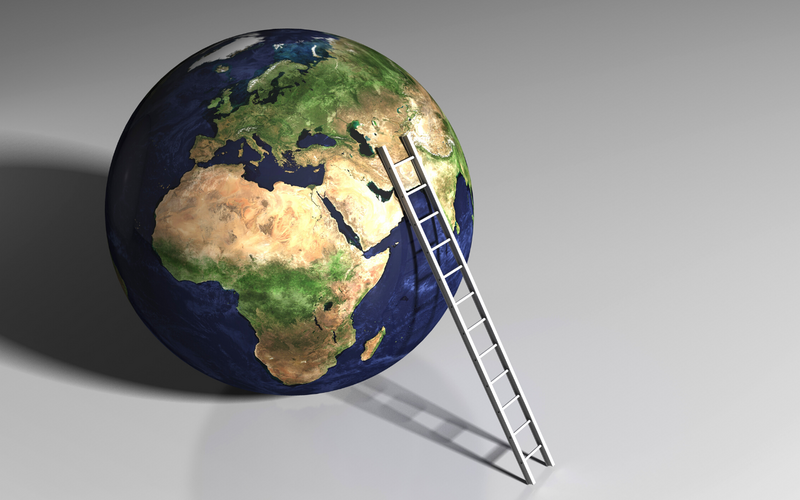 Years ago, a dear family member of mine was hired to paint the outside of an auto garage. Though the garage walls were two stories high, the paint was only applied up to the ten-foot level. My relative learned that their acrophobia (fear of heights) and climacophobia (fear of climbing) would not allow them to get higher than the second step of a ladder. It made for a comically incomplete job.

While many of us can relate to the literal fear of climbing or fear of heights, most of us humans are more-than-comfortable with ascending the metaphorical ladder of upward mobility, advanced education, financial success, and social influence. Sometimes the Church itself is criticized for promoting the downward-facing virtue of humility, for producing “human doormats,” and repeating words (from Jesus!) like “What does it profit a person to gain the whole world but lose their soul?” Such criticism fails to understand the heart of Christianity. Jesus did not come to produce a community of doormats. No. Jesus does not desire us to think less of ourselves but to think of ourselves less as we lift our eyes to him.

Over the past few weeks, I’ve found that I haven’t shaken my own youthful climacophobia when it comes to the great powers of the world willingly climbing the ladder of war. In politics, we call this “military escalation.” Russia unjustly invades Ukraine. Western nations respond by supplying arms and intelligence. The Russian military grindingly advances and starts bombing civilian targets. The USA and European nations create economic pain through sanctions and boycotts. Russia declares these sanctions to be tantamount to an “act of war.” Calls for a “no-fly zone” to be enforced over the Ukraine have become common which— if enacted—would lead to aerial munitions flying between Russian and Western planes. When does this escalation end? Who is going to slow us from climbing the ladder of war when both sides – rightly or wrongly – see their own cause as just and necessary?

My hope and confidence for resolution in Ukraine does not lie in the underdog bravery, nuclear self-control, or political cleverness of humanity. Rather, my hope and confidence rests in the God who loves to descend the ladder of eternity to come near to foolish mortals like us.

Consider that when Jacob dreamed of a “ladder to heaven” (Genesis 28:10-21), it wasn’t put there for him to climb, but for angels to descend while delivering the gracious promises of God. Jesus himself came down the ladder from heaven to earth. The highest that pre-resurrection Jesus would climb was a few, dreadful feet off of the ground while lifted onto the cross. Jesus routinely said things like, “those who exalt themselves will be humbled, and those who humble themselves will be exalted” (Matthew 23:12.)

Like my dear family member who struggled to paint the garage, I too suffer from a fear of ladders. However, it’s the ladder of my own success and the ladder of war that terrify me.

Peace to you as you look up to Jesus as the only one who occupies the highest place.

PreviousObstacles to Peace (Thoughts about Lent)
Next Spring Break 2022