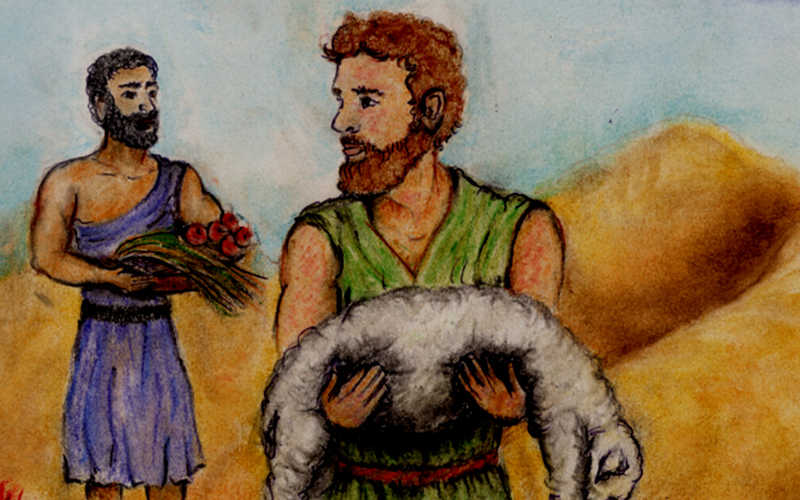 The First Thanksgiving (Not what you think…)

No, the first Thanksgiving did not happen around an autumnal table with the Pilgrims and Wampanoag tribe in 1621. Thanksgiving goes back quite a bit further than that – all the way back to the Book of Genesis, chapter four, where we meet two brothers, Cain and Abel.

In some ways, Cain and Abel are the first humans who are truly like us. Neither of their parents, Adam and Eve, was carried by a mother but rather formed directly by the Creator. They knew the earthly paradise that was the Garden of Eden. And Adam and Eve knew the direct presence and voice of God in a way that we do not. Cain and Abel, however, were just like us. Born into a fallen world. Carried in their mother’s womb. Their only experience of life colored by the lens of sins’ corrupting power. We are them. They are us.

In Genesis 4, the brothers make offerings to God – offerings of thanksgiving. While they were the first ones to do this, their experiences could not have been more divergent. Abel was a shepherd, and he brought “fat portions from among the firstborn of his flock.” That’s an ancient way of saying that he brought “the best of the best” to God rather than keeping it back for himself. Cain, on the other hand, was a farmer who brought merely “some of the fruits of the soil” as his offering to the Lord.

The Bible does NOT say that Cain brought wilted heads of lettuce and moldy carrots. But, there is a conspicuous absence of language that indicates that Cain brought the best, tastiest, or most valuable of his produce. It’s here that the paths of the two brothers diverge. God’s reaction to their thanksgiving offering also differed. Genesis 4:5 says that “the Lord looked with favor on Abel and his offering, but on Cain and his offering he did not look with favor.”

What’s going on here? Why won’t God shine his light on poor Cain as well? This story gets at the deep meaning of sacrifice in the human experience. Each of us must choose a path. Either we are willing to sacrifice what’s best in the present for a higher goal or higher somebody, or we’re inclined to keep the best for ourselves. One path is lit up with God’s favor. The other is an end unto itself.

It turns out that sacrifice is an essential part of being a flourishing human being – and – it pleases God. Every successful student, musician, and athlete has learned the discipline of sacrificing time in the present to prepare for future success. Every loving parent and grandparent has felt the irresistible tug to lay down their own preferences for the sake of providing for their kids. Every Christian has (I hope!!) been drawn by Jesus to live for eternity rather than merely today. Eternal life is the ultimate motivator to follow Abel’s example, delay our deep craving for immediate gratification, and instead lay the best of our time, talent, and treasure on the altar of thanksgiving for an even better future in the presence of the Lord.

The holidays are almost upon us, and with it, a season of gratitude and thanksgiving offerings at ECRC. This season is an opportunity to offer our best to our Maker and so to the path lit up by his light and favor. Such is the path of sacrifice.

PreviousSigns of Thanksgiving
Next The End is Near